Before Industrial Revolution 1, the 2nd millennum's most valuable world trade route was the silk road - it connected land mass rond one third of world's waistbelt 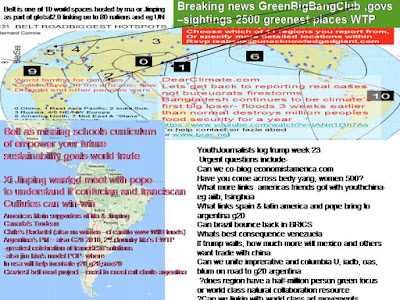 - for europe west to china east- civilisations were built on safeguarding the intrepid trading agents- eg it took marco polo 8 years outbound from italy and 8 yeras back from hangzhou china- there were many win-wins to discover from spices to noodles without which pasta migh never have become italy's signature dish; the size and kindness of chinese people made them the pivotal as well as most populous economy- one of accidental consequences of british empire was demand for opium which china increasingly did not want tio supply- so it waled itself in from trade- and didnt fully come out til 1976- from 2013 in his second of 10 yeras as china's leaders xi jinping started asking 81 countries at last count -

why not rebuild 21st c silk roads and other infsratructure belts from east toi west, south to north = belt road forum is beijing's graciously hosted summit every 2 years since may 2017 please report any sighting of new railroads, superports, green energy pipelines or all the other win-win connections that mapping win-win trade routes can bring now that we have real and digital ways of linking in WTP

United Nations: 'China is a key partner for Mexico'

CGTN Africa
The Belt and Road Initiative was in 2013 proposed to enhance the development of participating countries through closer ties.

CGTN
Some insights from CGTN's talented young chief correspondent who holds an MBA from the University of Cambridge? It's time to ...
Posted by chris macrae at 6:31 AM

- economics for maximinsing 7 billion livelihoods navigating 17 sustainability goals uniting nature and human tech
it should be no surprise that the future of youth sustainability now depends on mapmaking worldwide trade infrastructures- consider navigating win-wins across 11 regions shown and then of course every locality defined by its own greatest smes, its leadership at incraeing levels from governor to nation to 11 regions ( expect these regions to morph but as of 2017 the help provide anexpoential sowt aidit of whetger we can design global 2.0 and insdutrail revolution 4 to be the most exiting time for under 30s - ours is teh era where they lead 3 generation (their parents and grandparents) to achieve or destroy sustainability goals

Jack Ma: Alibaba Will Be the 5th Largest Economy Globally and Serve 2 Billion People in 2036

Artificial Intelligence
??? why jack being unusually modest - why not 1st economy
future of economics - exponential metrics :is system compounding goodwill future? celebrating livelihoods & sustainable human purpose -is there a greater job creating network than the free university movement?
(spring's hot debate -world bank Q of 2015: where do citizens have sustainable role in the future?)
In 1972, The Economist's Keynsian (aka dad Norman Macrae), saw students testing early digital learning networks. This coming net generation changes every future of society and economics 10 times exponentially more urgently than the start of the industrial revolution The Economist was born to mediate to end poverty in 1843. -see the original archives of curriculum of Entrepreneurial Revolution
-where can open learning channels and world record job creators most help millenials map ER in 2015 - Africa (Kenya July)? Haiti and Rome and Panama (AP10) ? ...chris.macrae@yahoo.co.uk washington dc mobile 240 316 8157
Our partners in publishing world record book and games of job creation welcome you, and those who celebrate this joyful logic Healthy open societies generate exponentially strong economies across generation not vice versa

major opportunities to transform sustainability of economics were discussed but missed, In NW advanced economies both at end of third and 4th quarters of 20th C; now in 2015 sustainability impact analysis as it determines global social valuation has in 2015 been called by the UN its greatest transformation challenge in its existence
- the most practical cases of value chain transformation millennials have ever been invited to map come in our view from jim kim and the greatest economics re-examination alumni networks appear to be gravitated around george soros www.sorosjobs.com
===
keynes concluded in is general theory - that economics determines what will be possible for your children and grandchildren- and that every economist's hippocratic oath should be ending poverty
what sorts of value chain analysis would be needed if economics were to live up keynes' purposes;

around 2015 we have a billion times more analytical power than when computers helped man race to the moon in 1960s- what sort of analysis will economics need to integrate if millennials are to be sustainable around rising exponentials out of every place starting with the globes poorest villages ie those without electricity or running water or equal access to education or markets
mail chris.macrae@yahoo.co.uk or phone our washington dc world citizen line 1 301 881 1655
comparing 2014-15 Top 21 Entrepreneurial Revolutionaries for youth/net gen to action learn with

2030nowjimkim2transcripts.doc, 40 KB #2030now .. youth celebrate at the world bank with Jim KIm 1 2 world bank ceo (& co-founder of PiHealth
=================
world bank youth challenge
millennial invitation from jim kim-post in a plan to redesign value chain of one of these 18 markets in time for world bank and end of stundent yera 2014-2015 to review - deadline 31 march 2015
Can you help edit job-creating youth networks converging on the greatest youth jobs expo - starting up in twin city form from Atlanta Nov 2015
ASSOCIATES OF BEYOND 20th C TV -please help us identify each web's forbidden question
Yunus.tv what's the breaking stories from youth's most joyful livelihoods and jobs broadcaster
Future Capitalism -how can we rid the world of economists who are not prepared to live Keynes 4 hippocratic oaths
ending poverty as overarching system design goal
designing/compounding futures next generations value most
ending risk that old acadmics get sponsored by the big or the extractive
integrating ownership of media/chanels around global vilage sustainbility
Wholeplanet.tv searching for 100 leaders and investors in 2010s can be worldwide youth's best of times:
productively
collaboratively
sustainably
Trillion Dolar Audit.com
- youth's visionary purpose for each trillion dolar global market- and what multi-win models can converge doing #2030now
worldclassbrands.tv